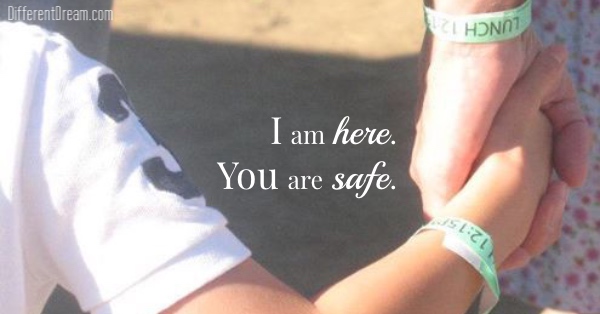 My son had a major orthopedic surgery back in 2013 when he was 9 1/2. The surgery was necessary to address imbalances in muscle tightness and bone development in his legs and feet caused by cerebral palsy. Thile he had endured medical treatments and surgeries while in the NICU during the first 5 months of his life, this was different experience.

The moment the nurses wheeled him, drowsy but still aware, away from us, fear filled his eyes. We let him know that we would be there for him when he woke up. He continued to stare at us. Once through the double doors leading to the operating room, my husband and I cried as we held each other, praying that we would meet our boy on the other side.

Many hours and many updates later, we were with our son as he started to wake from the anesthesia. When he opened his eyes, we could see fear and pain. He was lying in bed with casts that covered him from his feet to mid-thigh. While he may have understood the need for it, he was not prepared for the reality of what his post-surgery life would be like. Neither were we.

The more long-lasting and significant legacy of that surgery was the emotional trauma he manifested through sleep disruptions. Not only was Max unable and unwilling to fall asleep; but also, once asleep, he would wake several times screaming in terror. Initially, we would try to “talk him out” of his screaming and thrashing. But the more we tried to speak to him, the more his behavior escalated. He was operating from a place of fight/flight, reliving the trauma of his surgery, so trying to reason with him was not connecting with what he needed. His thinking brain had been hijacked, and he was acting out from his survival brain.

I had read about childhood trauma and the importance of helping a child to feel safe. Based on this, my husband and I developed strategies to deal with his sleep issues. Before bed, while he was calm and receptive, we would let him know that we would be there for him by saying, “I am here. You are safe.” Because Max needed some type of physical contact as reassurance, one of us would stay with him. Sometimes, it was holding his hands.  Other times, once the casts were removed and he was able to sleep on his side, it was draping an arm across him until he fell asleep.

What used to be a nightly occurrence, almost 7 years later, are not as frequent or intense. What remains is his need for one of us to be near when he goes to sleep each night. Now we have a family sleeping room where we drift off each night. When he wakes in the middle of the night he calls for me, I respond with “I am here. You are safe.” I place my hand on his back to reassure him of my physical presence, and he drifts peacefully back into slumber, resting in the knowledge that he is indeed safe. Heesun lives in Colorado with her husband and two children, Max and Jozey.  Her son, Max, is a surviving twin who was born 14 weeks premature.  Max has cerebral palsy as a result of a brain bleed during his first few days of life and developmental delays due to his prematurity.  As a homeschooling mom, she enjoys living life with her children, learning alongside them as they grow and develop.  She recently started blogging at www.mozeyingalong.com to share her journey with others.  It is her belief that the children we have are the children we need to grow into the best version of ourselves. The Hope Anew Disability Podcast is the latest offering from Jonathan and Sarah McGuire. Learn who it’s for and what it’s about in this post.

END_OF_DOCUMENT_TOKEN_TO_BE_REPLACED The ACEs and Toxic Stress: Implications for Children with Special Needs?

This infographic shows the relationship between ACEs and toxic stress. This relationship has implications for our children with special needs.

END_OF_DOCUMENT_TOKEN_TO_BE_REPLACED Preventing PTSD: 11 Things To Do If Your Child Has Been Through Trauma

Preventing PTSD in children who have experienced trauma is possible. Lydia Jenkins, D.O. Pediatrics offers 11 strategies for parents to use.